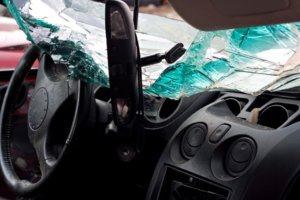 Clients always surprise me with their responses to questions concerning their insurance limits. Most of the time they make me smile, but sometimes they make me very sad. I’ve actually had people tell me they don’t need high limits on auto insurance because they are safe drivers, or they don’t have accidents. Really?? Have you ever said that or perhaps thought it? Can you predict the future? If so, I’ll take you on the next flight to Vegas with those crystal ball skills!

The definition of accident is, “an unfortunate incident that happens unexpectedly and unintentionally, typically resulting in damage or injury.” To be more specific, the legal definition of accident is, “in general, an unplanned, unexpected, and undesigned (not purposefully caused) event which occurs suddenly and causes (1) injury or loss, (2) a decrease in value of the resources, or (3) an increase in liabilities.” Accidents are unplanned or they would not be accidents.


Have you ever had something unexpected happen to you which you may have been your fault? Have you had something happen to you that someone else caused? What most clients don’t understand is the threat you experience on the roads and highways. Did you know that 1 in 5 drivers in the state of Tennessee does not have insurance? This number does not include the number of drivers who have the state minimum coverages of $25,000/$50,000/$15,000. How far do you think $25,000 would go to cover medical bills, rehabilitation services, or God forbid, medical assistance for the remainder of your life?

I can’t emphasize the dramatic way your life can change in the blink of an eye! I know, I know, it’ll never happen to me, BUT what if it does? Another startling statistic is that on average 1 in 3 people will be involved in a drunk driving crash in their lifetime. Will you have enough coverage to protect your lifestyle or the lifestyle of those you love if you are hit by a drunk driver?

According to the Association of Safe International Road Travel (ASIRT), nearly 1.25 million people die in road crashes each year. That is an average of 3,287 deaths a day with more than half of all road traffic deaths occurring among young adults ages 15-44. ASIRT also reports an additional 20-50 million are injured or disabled.

An old friend of mine was vacationing in Florida. While sitting in traffic in a construction zone, another vehicle crashed into his vehicle at over 80 miles per hour. His wife was killed instantly, and he was unconscious for two months! He, nor his beautiful wife, did anything wrong, but they were the victims of reckless driving—totally changing his life forever. The other party in this incident had no insurance, so the coverage for this accident fell entirely on my friend and his insurance.

The liability portion of your auto insurance policy is vital to protect your assets, but the uninsured motorist’s portion is the protection for you and your family. How much do you want to protect you, your family, loved ones, and your lifestyle? I just learned of another example from an out-of-town friend. She was t-boned in March and had her hip broken. She’s had two surgeries since then and had pins placed in her hip. She did not work for three months and can now only work half time. Her medical bills alone so far have totaled $347,000, and she is not finished. At least one more surgery awaits her. The doctor told her she will always have trouble and pain with her hip.

The party who hit her had $300,000 liability limits, so my friend’s under-insured coverage would extend coverage past this amount. When I asked her what her limits were, she replied, “only state limits” ($25,000). In this situation, she would be in a much-improved situation if she had higher limits.

The numbers on auto accidents are staggering. Safer America lists these among U. S. fatal car crash statistics.

With all these statistics, where are you? In 2010, the cost of medical care and productivity losses due to injuries from car accidents was more than $99 billion – nearly $500 for each licensed US driver. If you are the victim of or cause of an accident, are you protected?

You don’t have to travel hundreds of miles to increase your chance of an auto accident. An estimated 52% of car accidents occur within five miles of a person’s home, and 77% occur within 15 miles or less, according to a study conducted by Progressive Insurance. The misconception is that most accidents occur when you are far from home.

Another dangerous place is your home. I saw a great example of this last weekend at my home. I love physical labor (reminds me of childhood), and I participated in a lot of physical labor last weekend. This labor included painting my deck after pressure washing, and no I didn’t fall from a ladder. As I was walking down my outside stairs with a gallon of paint in my hands, the step broke (the step that was 6 feet from the ground). 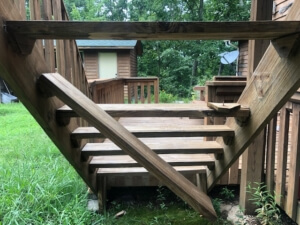 I fell and straddled the railing with my head hanging near the ground. Lucky me, I didn’t break any bones and didn’t spill any paint

! My thoughts immediately went to “what if someone else had taken that step and fallen.” Accidents happen at homes every day, and some can be very serious. I know you have all read about decks that have fallen with several people on them. Dangerous situations await without our knowledge.

If you entertain at home or in other social environments, you can cause an accident or be blamed for an accident. If kids are visiting in your home, this is another potentially dangerous situation. Several years ago, one of my clients and their family were playing at the neighborhood pool. Another adult fell into the pool and suffered a back injury. He was permanently paralyzed, and my client was sued from the “horseplay.”

In the United States, injury is the leading cause of death among children and young adults, and nearly half of these accidents occur in the home, according to the National Safety Council. When it comes to injury and death in home accidents, the leading culprits are falls, toxins and suffocation by ingested object or smoke inhalation. The kitchen and the bathroom are the most likely spots to suffer an injury or fatality. Those are the two most dangerous rooms in the house.

Dull kitchen knives are actually more dangerous than sharp ones because the worn edge makes it easier for the knife to slip. A knife slip means a nasty cut, stitches or potentially even the loss of one of your more treasured digits.

National data from the Centers for Disease Control (CDC) shows that poisoning leads to nearly 75,354 fatalities each year.

Accidents involving fires and burns are the third leading cause of home injury deaths, and they claim more than 3,000 lives a year. Dangerous products under the sink can be inviting to children. Preventative measures include safety latches and storing these items in higher cabinets.

In all of the circumstances I have talked about above you can be injured and need your insurance. Believe me, there are situations you cannot even fathom. It is difficult to imagine something bad happening to you or your family and loved ones, but it is critical that you are prepared should an accident happen to you or someone else. I saw a great proposal the other day, and it so relates to insurance—“You are free to choose, but you are not free from the consequences of those choices.” If you choose to be cheap with your insurance program, you may have unintended consequences for you and your family. Does the lowest price protect you and your family should an accident occur? Choose wisely!

7 Things that Drive Your Insurance Agent Crazy
Scroll to top

In order to practice safety for our staff, we are working from home BUT still working! Our team is committed to serving our clients. Call us at 865.213.2111 or email support@beaconprotects.com for assistance.